Issue: Lost deleted all work / computer has crashed and everything has gone.
This can happen for a number of reasons, such as forgetting to save or unexpected power outages 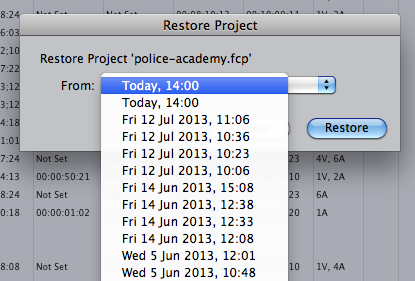 Restore the project to the most recent good version.

Final Cut Pro has a feature called the ‘Autosave Vault’ . A backup of each open project is made every thirty minutes. If the project has been re-named or ‘saved as’ these backup copies will not be available from the file menu command. They can be located by opening the folder: > final cut pro documents > autosave vault > project name.fcp (the name before the project was renamed or saved as)
Other digital video editing issues
Posted by Seamus McGrenery